I got some new reds in the mail from CIM a couple weeks ago. I am not an official tester but did some of my own testing to see what they were like. 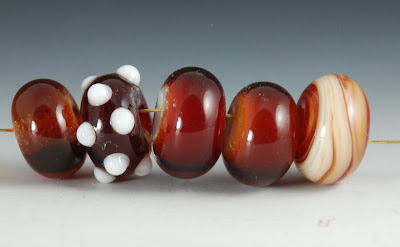 The first one is Crimson. Here seen from left to right : over clear, plain (with raised dots), over white (for two) and mixed with CIM Peace (white). It is an orange red leaning towards brown. I found it hard to strike. Some areas on the white hearts didn't strike as far as the other areas it took a lot longer than Effetre or BE striking reds. I do not have a problem getting those to strike as other lampworkers say they have 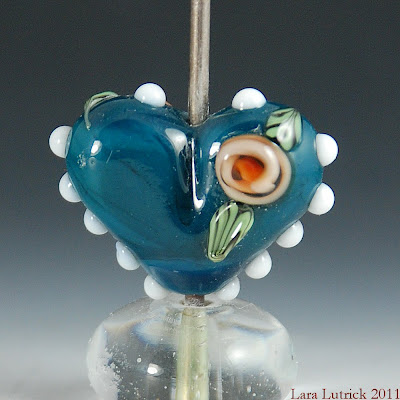 Here seen as a cased stringer over CIM Peace. I have not made a rose with Effetre Red (not sure why), but this leans towards orange and I was disapointed it didn't get darker, but I'm thinking that with such a thin layer of red, it just isn't dark. 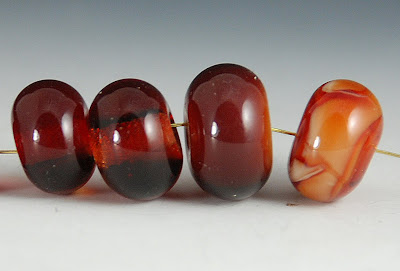 This is Ruby Shoes (ok, great name by the way). It too was hard to strike. Seen here from L to R: plain bead, over clear, over CIM Peace (white) and mixed with white. Also leans towards orange or brown compared to Effetre Transparent Red, but a bit brighter than Crimson, at least in person. Dorky me, didn't make any Effetre or BE red beads to put next to these. 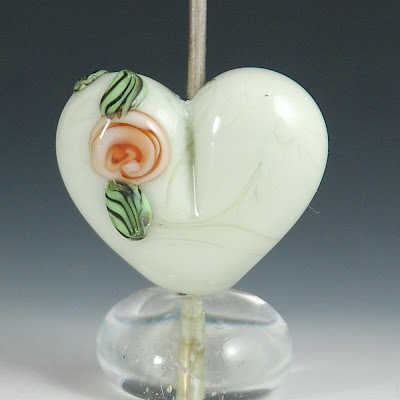 Here Ruby Shoes is seen as a cased stringer over Peace, again looks very orange. Same issues as above, perhaps a thicker casing layer when making the stringer would look darker. However, even though the rose isn't a deep dark red, I like the lighter color, it is a nice color for flowers. Too bad I get this one too cold and it cracked (AUGH).

Lara - great post - thanks for the info on the reds!

Oh gosh. Are ALL their reds striking? I SUCK at striking. I bought Maraschino -- did you try that?

The Maraschino is not striking, but is swirly. It goes partially opaque and partially transparent (augh), but it is a lovely candy apply red.

Promote your Page too

Lara Lutrick
I have been making lampwork beads in my garage studio since 1997. Lampwork beadmaking is my passion, it is so much fun. I find making handmade glass beads an outlet for my creativity and it feeds my soul. My beads can be found on ArtFire and Etsy (user ID: lutrick). Jewlery can be found at Etsy, ArtFirea and at the Up Front Gallery in Issaquah Washington.